» » Wordle vs Lingolish: Games Where You Guess The Word

Wordle vs Lingolish: Games Where You Guess The Word

Are you looking for Wordle alternatives? or maybe you are thinking of trying other free brain training games? Well, Lingolish offers all that plus more than 7500 challenges and multiple game modes. But first, let’s view the history and different types of these word games.

Origin of Wordle and Lingolish goes back to “guess the word games.”

Lingolish and wordle are both word games that originate from the classic board game Mastermind. Mastermind is kind of a “guess the word game”! It is a two-player color guessing game. The letters are colored based on their correctness and their position. The colors were marked as three different types, based on the fact whether they were in the hidden combination or not and if they were placed correctly. We can also see some similarities with the games Bingo and Lingo, which are number and word guessing games. Lingo, in particular, was a TV show bearing the most resemblance with Lingolish and Wordle. The board of the Wordle game consists of five 5-letters words, organized on a five-by-five colored table.

Basics of the game and different game modes

Wordle has extended the Maximum attempts to six guesses from the list of about 2500 five-letter words, which is slightly different from Lingolish. Lingolish puzzles range from low to high difficulty and include three to seven-letter words. Different game modes challenge the word guessing process: In Time Mode, you will be challenged to guess the hidden word in a limited time. You will go against an AI monster and will have to guess the secret word before it does. You will have a limited number of guesses in Frozen Time mode, or you can guess freely with no limitations and challenges in Infinity mode. These games have a color block system that determines the correct and wrong word guesses. If a letter is green, it means it exists in the word and is in the correct spot. Yellow means that the letter is in the word, but it is in the wrong place. Gray means that the player did not guess the letter correctly. After each guess, when the letters are colored, you are one step closer to revealing the answer. You should try to make valid words out of the letters that are not gray.

Wordle only has one daily word and challenge for the day. This would, on average, take three minutes of the player’s time which is disappointing for the average player considering the addictive nature of the game. However, you can play Lingolish as long as you want every day. In other words, if you wish to play an unlimited version of Wordle, Lingolish would be the best choice for you. Furthermore, having multiple game modes like Basic Mode, Robot Mode, Endless Mode, Frozen Time Mode, and Story Mode ensures that you will never get bored trying all of them out.

In addition, the Lingolish game is not just about words. In the Brain Train section, you will face other exciting challenges in the game. Challenges that will satisfy the super fans of speed and memory games. Although playing in this section is optional, you may become addicted to it and wait at any moment to receive the notification to get started.

As you progress in different parts of the game, whether on the map, the Brain Train, or other challenges, by collecting points and coins, you can benefit from the features in the game or send them to make the difficult steps easier.

How does our story translate into the word puzzles?

Our story revolves around a blue Martian named Bruno, who is in trouble. Have you ever encountered a helpless Martian trapped and asking for your help? Of course not! But imagine if you did. What would he say? How would he say it? What is he trying to tell you? Of course, The answer would be “HELP” or something similar. Lingolish has its story mode and graphical designs for a reason.

It’s essential to pick up the visual clues and guess based on what you see and where you are in the story. The words are not entirely random. Each secret word will help tell the story of our game. For example, when someone from planet Earth wants to talk to the Martian and make him aware of where he is, you’ll see planet Earth on the screen, and based on the visual, you can guess the secret word might be “EARTH.” 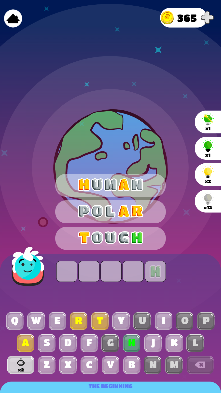 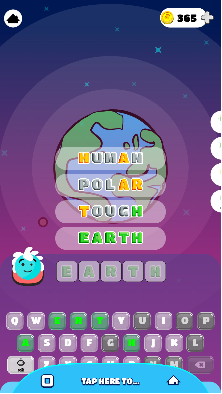 But do not think that the visuals will be easy to guess. They will only help tell the story and give you tips to guess the secret word. Also, the visual updates with every guess that you make and gives more clues. Obviously, you cannot see the visuals without getting closer to the answer; otherwise, the game would be too easy as you progress. The visual on the screen updates and gives essential hints of the secret word. However, after you win or lose the level, the hidden word changes and gives you a different challenge. So, no one can memorize the clues and then try to use them again in order to win faster or set a high record. So, trying to cheat your way into getting the time-based achievements is useless. We want the results to be real, so players can compete with each other and share their results with one another.

Wordle, however, is straightforward in this regard. It just gives you a random word to guess. Moreover, implementing our original story into the puzzles makes Lingolish unique and engages the players with the game.

Lingolish offers a variety of ways to play. You can play by yourself or decide to play in competitive game modes with your friends or other players in the game. Wordle players have had their way of sharing their results of the challenge of the day and bragging over who finished in fewer tries than others to challenge other players. But this lacks the direct confrontations which are present in Lingolish. Here, you can challenge other players instead of playing with the AI. It also features an in-game Leaderboard where you can compare yourself to other players, compete and beat the existing records and share your high scores. You can also check several achievements on your profile based on your progression and performance at each level.

The best opening words for Lingolish and Wordle Puzzles

Players always want to have a faster way of guessing the secret word by using an excellent opener word. The words used in Wordle and Lingolish are limited to commonly known words; Because not even the most fluent speakers know all the obscure words in the English Language. So, let’s start with the most used letters in the English alphabet. There are many debates online on the best Wordle opening word. For a more scientific approach, we’ll be referencing the study written by Peter Norvig. He consulted the Google books Ngrams database, which makes the process easier to find words mentioned in the books scanned by Google. Ranking from top to bottom, the 13 most used letters in the English language by standard order of frequency are “ETAOIN SRHLDCU.” In the original study by Mark Mayzner in 1965, “ETAOIN SHRDLU” was the conclusion of the research. It was later used for designing old keyboard layouts.

So, learning this, we can have an easier time in many of the hidden word games out there. One factor you must not forget is that these games won’t accept a random string of characters as their secret word. The guessed word must exist in the English language. Otherwise, it is considered invalid. By guessing words using a combination of these letters, you’ll have a higher chance of winning. Here are some examples: CAR, ALERT, CRANE. We will not write every possible word for you here. The challenge is all yours! So, be sure to use these letters on your first try and also to pay attention to background and visuals for more clues.

Don’t forget to rate our game and submit your feedback.

What makes a good family relationship? Video Games Good For Brain Development and Having Fun